Here is a List of essential Docker Interview Questions and Answers for Freshers and mid level of Experienced Professionals. All answers for these Docker questions are explained in a simple and easiest way. These basic, advanced and latest Docker questions will help you to clear your next Job interview.

These questions are targeted for Docker (a set of platform as a service (PaaS) products). You must know the answer of these frequently asked Docker interview questions to clear a Job interview. Development of ASP.NET Web API and Spring Boot MicroServices with Docker is very popular so you can find these technical questions very helpful for your next interview.

2. What is the Docker Engine?

Docker Engine is an application which has client-server type architecture with these major components. 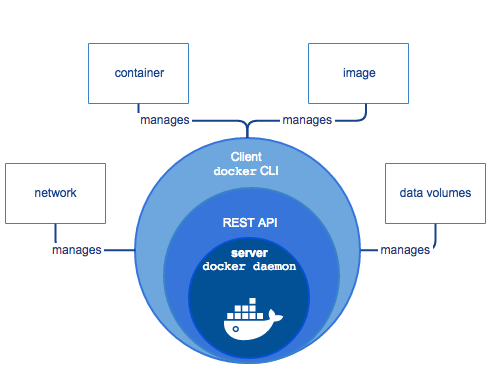 3. What can you use Docker for?

You can use the docker for:

4. Give some Docker Example scenarios.

As Docker provides the consistent and fast delivery of applications, these are the below examples for that.

Docker is based on client-server architecture. Docker client talks to docker daemon (A long running program) via REST API over a network interface or UNIX sockets. Docker client and daemon can run on the same system or remote. Docker daemon is responsible for building, running and distributing the containers. 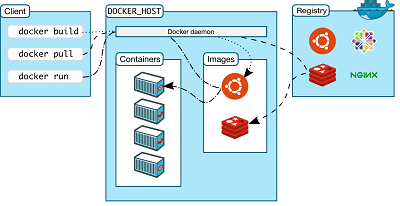 6. What is DTR (Docker Trusted Registry)?

If you are using Docker Data Center (DDC), then Docker provides an enterprise grade image storage solution called Docker Trusted Registry (DTR). DTR can be installed on virtual private networks or on-premises so that you can store your images in a secure way and behind your firewall. DTR also provides a User Interface that can be accessed by authorized users to view and manage the repositories.

7. What are the common Docker objects?

With Docker you use many things like Images, Containers, Registries, Services, Volumes etc. These all are Docker objects.

A Docker Image is a read-only template with instructions that forms the basis of a container. It's an order collection of file-system changes. Image is based on another image with some customizations. For example, you can create an image that is based on 'ubuntu' image but you can install other application dependencies.
Images contain a set of run parameters (starting executable file) that will run when the container starts.

9. Why Images are light weight, fast and small?

Docker allows you to create your own image using a docker file with simple instructions needed to create an image. Each instruction creates layers in docker image. So when you make any changes in a docker file then only changed layers are rebuilt, not all, this is the reason that docker images are fast, small and light weight in comparison to other virtualization systems.

Containers are created from Images or you can say Container is a runnable instance of an image. When you build your image and deploy the application with all the dependencies then multiple containers can be instantiated. Each container is isolated from one another and from the host machine as well. So A Docker Container is defined by an image and other configurations provided when you start or create it.

11. Explain the underlying technology of Docker.

Docker is developed in Go Language and has capability to use many Linux kernel features to deliver the functionality. Docker also relies on many other below technologies as well.

12. What is Docker Swarm? How is it different from SwamKit and Swarm Model?

Docker SwarmKit is a separate project which implements the docker orchestration system. It's a toolkit that orchestrates distributed systems at any scale. SwarmKit's main benefits include: For more visit Docker SwarmKit

Dockerfile is a file that holds a set of instructions to create an image. Each instruction of Dockerfile is responsible for creating a layer in the image. When you rebuild the image, only changed layers are rebuilt.

A service is created to deploy an application image when the Docker engine is in swarm mode. A service is nothing here, just an image for a MicroService in the context of a larger application. Services examples might include databases, HTTP server or any executable program that you want to run in a distributed environment.
When creating a service you must specify the container image to use and commands to execute inside running containers. For more visit How services work in Docker.

17. What is Containerization? And why is it being popular?

18. What are the docker client commands?

19. What are the docker registry commands?

20. What are the docker daemon commands?

21. Give an example of a simple Dockerfile.

22. What is the difference between RUN and CMD in Dockerfile?

23.Explain some quick facts about Docker.

Developers are considering Docker as a good choice to deploy the application any time, anywhere - OnPrem or Cloud. Let's know some facts about it.

Docker offers a quick way to build, develop, ship and orchestrate distributed applications in isolated environments.
Docker is being used by many companies to make developer's processes faster. Docker also provides automatic deployment management. So most companies are adopting this containerized approach for their application development and deployment.
Docker also provides integration with many hundreds of tools like Bitbucket, Jenkins, Kubernetes, Ansible, Amazon EC2 etc. So there are a lot of jobs in the market for Docker skills and Docker Professionals are being paid very good salaries.

Some General Interview Questions for Docker

1. How much will you rate yourself in Docker?

When you attend an interview, Interviewer may ask you to rate yourself in a specific Technology like Docker, So It's depend on your knowledge and work experience in Docker.

2. What challenges did you face while working on Docker?

This question may be specific to your technology and completely depends on your past work experience. So you need to just explain the challenges you faced related to Docker in your Project.

3. What was your role in the last Project related to Docker?

It's based on your role and responsibilities assigned to you and what functionality you implemented using Docker in your project. This question is generally asked in every interview.

4. How much experience do you have in Docker?

Here you can tell about your overall work experience on Docker.

5. Have you done any Docker Certification or Training?

It depends on the candidate whether you have done any Docker training or certification. Certifications or training are not essential but good to have.